On Monday 5 October 2015, the Monaco-Impact Association (*), founded by Peter Kütemann, convened a meeting at the Monaco Foreign Residents Club (CREM) to introduce potential donors to a project which is dear to the Association’s heart and which it is keen to support. 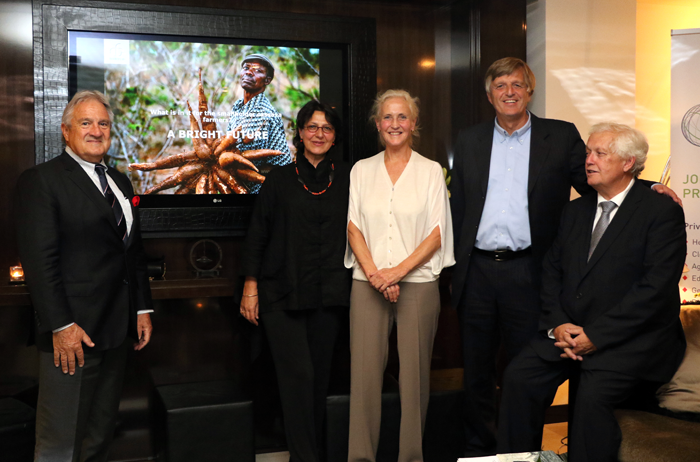 At a time when the thousands of migrants arriving on the coasts of Europe are uppermost in everyone’s mind, Dadtco(**) (Dutch Agricultural Development & Trading Company) has found a way to enable disadvantaged African people to exploit and market one of their most nutritious agricultural resources: cassava.

Cassava offers a number of advantages: it is easy to plant, requires little water and can be harvested throughout the year. On the down side, once out of the ground the roots deteriorate so rapidly they must be processed within twenty-four hours.

Until now smallholder farmers have been restricted to growing cassava for local consumption because they do not have the resources to transport it long distances to processing plants.

Dadtco’s founder and Managing Director, agricultural engineer Peter Bolt, has changed this by developing a mobile processing plant that goes to the farmers rather than the farmers having to go to the factory. Throughout the year the Autonomous Mobile Processing Unit (AMPU) moves around the areas of Mozambique, Nigeria and Ghana in which cassava is grown, processing the freshly-harvested roots directly into high-quality cassava cake. The cassava cake, which contains 45 – 50% less water than the roots, so is far easier to transport, and has a ‘shelf life’ of a year, is then sold to local industries.

Taking this initiative a step further, Dadtco has developed a partnership with the SAB Miller brewery, which buys the cassava cake and uses it to manufacture its “Impala” beer in Mozambique and “Eagle” beer in Ghana.

Thanks to the generosity of Mr. Kütemann, founder of one of Dadtco’s main shareholders – the Peter Kutemann Fund – research has led to the synthesizing of an enzyme which enables the cyanide to be removed from cassava flour. Although the process has been patented, the Peter Kutemann Fund has allowed Dadtco to use the technology free of charge.

The opportunities are huge because the starch derived from cassava is of a high quality. It has many uses in the food industry (bread, pasta, stock cubes, fizzy drinks, etc.) and also in the chemical industry (glue, stationery, biodegradable plastics). Meeting the challenge of successfully transforming local smallholder farmers into traders has come at a heavy technical and financial cost, but we are proud to see how the living conditions of the farmers and their families have improved over the years”, explains Mrs. Suzanne Vlakveld, an industrial engineer and Dadtco’s Value Chain Manager. “These farmers, who lived only by bartering, had practically never seen or owned money. Now they are paid as soon as their harvest is delivered, in cash and without the services of a middleman, they are investing in improving their huts and buying poultry, which provides protein in their diet and their first thought is for their children to be educated.

Dadtco’s CEO Marius van Huijstee: Dadtco is currently working in Mozambique, Ghana and Nigeria, but we want to increase construction and set up new AMPUs in other African countries such as Angola, Cameroon and Rwanda, as well as Indonesia and Colombia.