Ocean protection project: it is only the end of the beginning

Ocean protection project: it is only the end of the beginning

On May 3rd, the Oceanographic Museum of Monaco’s conference room was filled with energy as people from very different backgrounds were gathered for the presentation of the International University of Monaco’s (IUM) students final work on the Ocean Protection project. 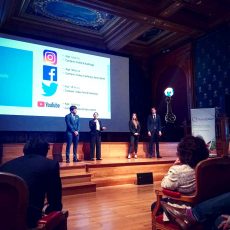 Monaco Impact members sat together with students and representatives from IUM, representatives from the Museum as well as with Frédéric Genta, Interministerial Chief Digital Officer for the Principality and Leila Elling, President of the Friends of the Oceanographic Museum of Monaco Association.

In front of the jury made of Mr. Genta, Mrs. Elling, Monaco Impact’s President Peter Kütemann, the CEO of the Museum Mr. Calcagno and IUM’s General Director Mr. Jean Philippe Muller, four teams made of Masters students in International Management and Bachelors in Communication and Entertainment presented with names as amusing as “The Monaco Turtles”, “Ocean’s 9”, “The Sailors” and “The Sharks”.

As part of the Ocean Protection project, two teams had to work on “how to keep and develop a relationship between the Museum and the young generation as well as on how to improve its influence using digital tools” while the two other teams had to work on another subject that was “how to stimulate the community of young people and empower them to become actors of Ocean Protection through a challenge/competition.”

After many very professional-looking and entertaining presentations including videos, photomontages and pictures, the jury’s final decision was unanimous: the “Monaco Turtles” who worked on the first subject were the group that proposed the most feasible, innovative and attractive ideas.

Indeed, their anticipation to contact a young influencer that would partner with the Museum to do a mini-series on Ocean Protection impressed, their idea to have a fake coral wall on the roof to raise awareness on their disappearance and take pictures pleased the jury and finally their idea to setup a digital escape room in the Museum intrigued everyone in the audience. Indeed, escape rooms are currently really popular. The idea is to be locked in a room and can find a way out by solving intrigues. This game would attract many visitors and especially young people while being educational as it would be related to Ocean Protection and innovative as it would be made of digital walls.

This project is now at the end of its first edition, but it is only its beginning on many other aspects.

Indeed, the winners will now work hand-in-hand with the Museum as well as with Monaco Impact in order to implement their ideas and advise the Museum. This will allow the Museum to have a direct opinion from the young generation. This should turn out to be really beneficial to stimulate young people regarding Ocean Protection.

In addition, it is hoped that next year this competition will be extended to the IUM’s partner universities and over the years go global.

It is now time for the winners to get closer to the animals they have been working on to protect. Indeed, their reward sponsored by Monaco Impact will soon allow them to get on the Santo-Sospir and go Whale Watching during a privatized tour with SOS Grand Bleu, an association deeply involved in ocean and marine life protection.

Moreover, thanks to the Friends of the Oceanographic Museum of Monaco Association, each student who participated to the competition will have the chance to visit the Museum for free in the coming year. This will give them a chance to observe the changes made in the Museum and have the opportunity to come up with even more ideas.

Overall, this project is already a success as a group from the young generation has shown great interest regarding Ocean Protection and came up with many different ideas to contribute to its preservation: the students themselves. It is now their turn to spread the word and to work with the Museum to push the boundaries and include as many young people as possible in our fight in favor of Ocean Protection.